Let’s face it; mom life comes with some…shall we say, questionable smells while driving the kids around. From a two-week-old juice box buried underneath the driver’s seat to diaper accidents, the car gets a little stinky every once in a while.

But one smell a parent never wants to have floating around the car is that of gasoline. The smell of gas sends every parent into an understandable state of panic, and for a good reason!

Generally speaking, the smell of gas in the car warrants your immediate attention. While some causes may be benign and fix themselves, like accidentally spilling gas on your shoe while filling up, most require a mechanic to look at the vehicle.

There are hazardous conditions that gas smells point to, including fuel line links, failing fuel pressure regulators, and a fuel injection system problem, and these issues require a mechanic to fix.

The good news is, you can usually rule out a few gas-related problems by investigating the car. Keep reading for more details on types of gas smell-related car situations.

There are times when gas smells aren’t dangerous and will resolve on their own. In most of these instances, the smell of gas comes from passive exposure to the substance. You’ll often notice gas smells in and around the car when you’ve just filled up the car.

Occasionally drops of gas are left behind on the pavement or lingering on the gas cap – the fumes from these droplets can make an appearance when you turn the car back on.

Similarly, if you drop a few droplets of gasoline on your shoes, hands, or clothes, you may notice the smell of gasoline for a few minutes until the scent evaporates.

How Dangerous Is Exposure To Gasoline?

In general, accidentally dropping a small amount of gasoline on a shoe won’t do much harm. You can wash your hands and clothes to remove any remaining gasoline.

Even gasoline lingering near the gas cap doesn’t pose much risk. As long as the smell of gasoline disappears after a minute or two of the car running, there probably isn’t cause for worry.

Gas caps keep the gas tank fuel from escaping while the car runs. While the little cap may seem nothing more than an extra precaution, it is an essential piece to the car’s fuel system.

Gas caps prevent moisture, bugs, and debris from getting into the gasoline, keeping the car safe from fuel system damage. Additionally, when gas caps are cracked or missing, gasoline vapor may invade the car’s cabin. 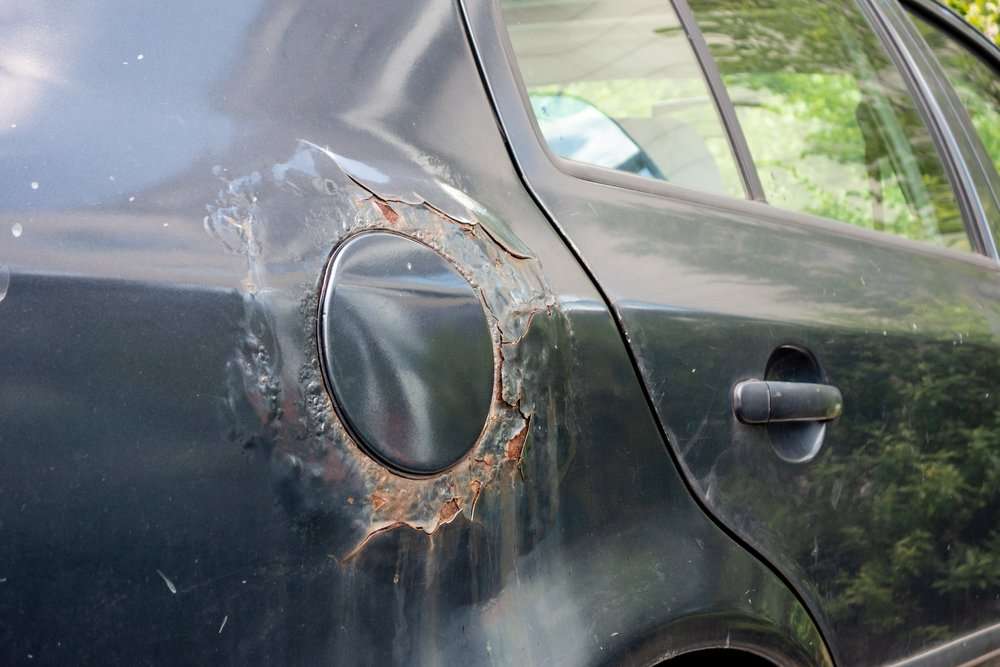 How Dangerous Are Missing Or Damaged Gas Caps?

For the most part, a missing or damaged gas cap is not a car emergency. However, a replacement needs ordering to provide adequate protection for the car’s fuel system from driving debris.

Additionally, gas vapor can escape from the tank when a gas cap is missing or broken, and this vapor is combustible when exposed to something like a cigarette.

The fuel line of a vehicle links the gas tank to the engine. Fuel lines do break down over time and occasionally will crack or develop a hole.

You may notice a fuel line leak if, along with the smell of gas, you see trickles or puddles of gas develop underneath the car. Tracking a fuel line leak generally requires the vehicle to be lifted on jacks and inspected for damage by a mechanic.

Fuel tanks corrode and develop damage over time. Roadside hazards like metal nails or debris can sometimes puncture a fuel tank, leading to leaks and trickling gas much like a damaged fuel line.

Usually, a mechanic can quickly diagnose a fuel tank leak by putting the car up on jacks and inspecting the tank itself.

How Dangerous Is It To Drive With A Fuel System Leak?

Yes, when fuel is leaking, the car becomes dangerous to drive. Leaking gasoline creates a slick road hazard for drivers to navigate and is flammable.

If you suspect a gas leak to be the cause of gasoline smells, take the car to a mechanic ASAP. Don’t put off an inspection where gasoline leaks are concerned.

Fuel injection systems seldom leak, but they can happen. When a fuel injection system experiences a leak, it generally is located near the rubber o-ring or rubber seal. When these seals are damaged, fumes may escape into the car’s cabin.

You’ll usually notice the smell of gasoline once the vehicle has warmed up and the engine is running if the fuel injector leaks. A mechanic can quickly diagnose a fuel injection system leak and replace the damaged seals.

How Dangerous Is It To Drive With A Fuel Injection System Leak?

The engine of the car relies on a precise fuel-to-air ratio. When there is more fuel than air in the ratio, it is considered too rich. If the fuel injection system uses a too-rich mixture of air and gas, the car’s engine may not burn off some of the gasoline in the combustion cycle.

The leftover fuel will then be released into the car’s exhaust, leading to the smell of gas coming from the exhaust. Adjusting the ratio falls into a mechanic’s line of expertise.

How Dangerous Is Driving With A Rich Fuel Ratio Dangerous?

In general, driving with a rich fuel ratio does not pose any direct danger to a car or its occupants. However, it isn’t good for the environment and wastes fuel.

Additionally, rich fuel ratios are dangerous when the vehicle is left running in a closed-off garage space. It can pollute the air with carbon monoxide and cause breathing problems or carbon monoxide poisoning.

When a cap has cracked, or the o-ring is worn out, those fumes pass through the car’s heater and air conditioner vents. Thankfully, you can usually diagnose oil cap problems by inspecting the oil cap and its valves. If debris or oil is around the valve, the cap or o-ring probably needs replacing. 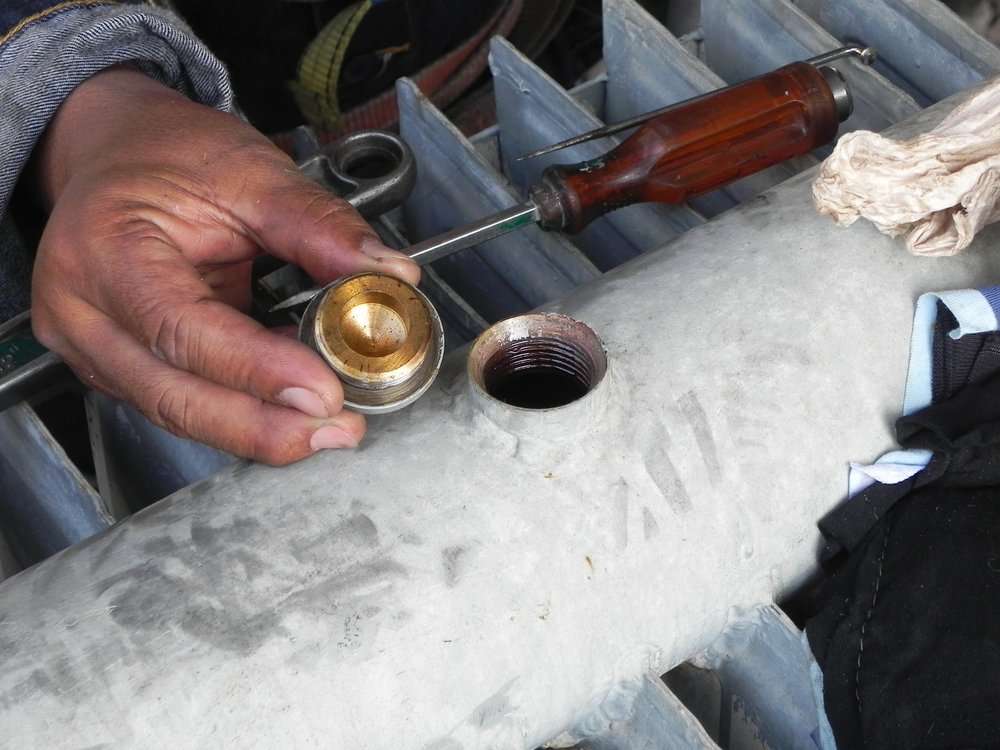 How Dangerous Is Driving With A Damage Oil Cap Gasket?

It can be dangerous for you to drive for long with a damaged oil cap gasket or o-ring. The fumes produced by gasoline contain carbon monoxide. Prolonged exposure to carbon monoxide can cause headaches, dizziness, and in extreme cases, lead to death.

If you are unsure of replacing the cap or o-ring or thinking there may be another problem causing the gas smell, take the car to a mechanic ASAP for an inspection.

The evaporative emission control system or EVAP prevents the gasoline fumes of a vehicle from reaching the atmosphere. The charcoal canister of the EVAP system, made of activated charcoal, absorbs excess gasoline fumes.

It’s an essential component that keeps emissions down, helping the vehicle comply with state emission laws and protecting the environment.

Sometimes an EVAP charcoal canister crack or leak is detected when the check engine light comes on or due to a failed emissions test. When the charcoal canister is damaged, excess gasoline sits on the gas tank or vents out from the car into the atmosphere.

How Dangerous Is Driving With A Broken EVAP Charcoal Canister?

Yes, it can be dangerous for you to drive with a cracked charcoal canister. The excess fumes from the unburned gasoline in the canister will often buildup in a car’s cabin, exposing its occupants to the harmful effects of carbon monoxide.

Prolonged exposure puts other drivers at risk as well, as you are more likely to get into an accident if confused or dizzy due to carbon monoxide poisoning.

As surprising as it may be, spark plugs do sometimes play a role in gasoline smells. Spark plugs play an essential role in the car’s combustion system: they provide the spark to the combustion chamber.

However, a loose spark plug can let fumes leak from the combustion chamber into the car’s cabin.

How Dangerous Is Driving With A Loose Spark Plug?

Loose spark plugs aren’t an immediate danger to the car or its occupants, but the fumes that they let escape into the car’s HVAC system are dangerous. Carbon monoxide exposure at any level puts a car’s occupants at risk for dizziness, confusion, headaches, and breathing disturbances.

Additionally, a loose spark plug will lead to expensive engine damage if left unchecked. A mechanic should look at the spark plugs and make adjustments as needed to prevent damage from occurring to the engine.

A Final Note On Gas Smells

If you’ve got questionable gasoline smells invading the car, don’t leave anything to chance. Check for any apparent signs of leaks, and contact your local mechanic right away. Gasoline is flammable and toxic, and you should never ignore its presence. 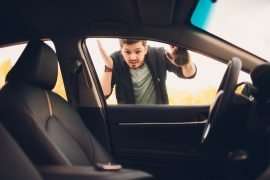 Why Does My Car Keep Locking And Unlocking Itself? 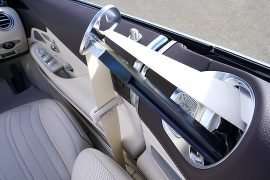 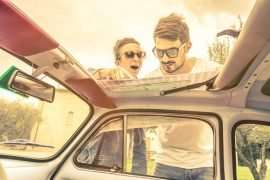