It’s Monday morning, and you’re running late. You’ve strapped the kids into the car, and finally, you’re putting the key into the ignition – except, the key won’t turn! I’ve had plenty of mornings ruined by a stubborn key stuck in the ignition.

In general, a car key not turning in the ignition points to a locked steering wheel or worn down car key.

These problems are annoying but not serious and quickly remedied. However, in extreme cases, a key not turning in the ignition indicates a faulty ignition cylinder. If the cylinder is damaged, the car won’t start no matter how hard you try until you (or a mechanic) replace the cylinder.

Keep reading to explore the causes of a stuck car key and how to fix the problem to get back to driving!

What Do I Do If the Car Key Won’t Turn?

If the car key doesn’t turn in the ignition, you’re probably ready to spit fire and say a few bad words in the car. Before you start yanking on the key and try forcing it to turn, stop and take a breath. Jerking the key in the ignition will only make matters worse.

After you’ve given yourself a second, then start to try and diagnose the cause of the problem. The solution to a stuck key differs depending on the direct cause of the issue.

Work your way through these “quick” steps to ensure it’s not a minor problem like a dirty key first before progressing to diagnosing a more severe problem with the ignition or key.

1.Check For A Dirty Key

Make sure the key is not dirty. Rub it clean with alcohol, hand sanitizer, or a glass cleaner to remove any possible residue causing the key to stick or not activate the lock correctly. Dirty Key

2.Check For A Dirty Ignition Cylinder

Spray the ignition cylinder – the slot where the key is inserted in the steering column – with canned air to clear any possible debris blocking the key from turning.

3.Check For A Seized Ignition Cylinder

If the canned air or clean key still does not fix the situation, try to spray the ignition slot with WD40. Occasionally, ignition cylinders seize up and need lubricating to turn. Lubrication is a temporary fix that helps get the car started long enough to get to a mechanic to replace the cylinder.

4.Try To Use A Backup Key

If your vehicle came with a backup key, try to use it. Note, this key may not have a fob remote and may just be a basic metal key. If the backup key does not work, it points to a more severe problem with the ignition cylinder, starter, or car battery.

If you cannot diagnose and resolve the problem yourself, run through the three most common causes of a stuck car key below and call a roadside assistance service to get you to a reputable mechanic. 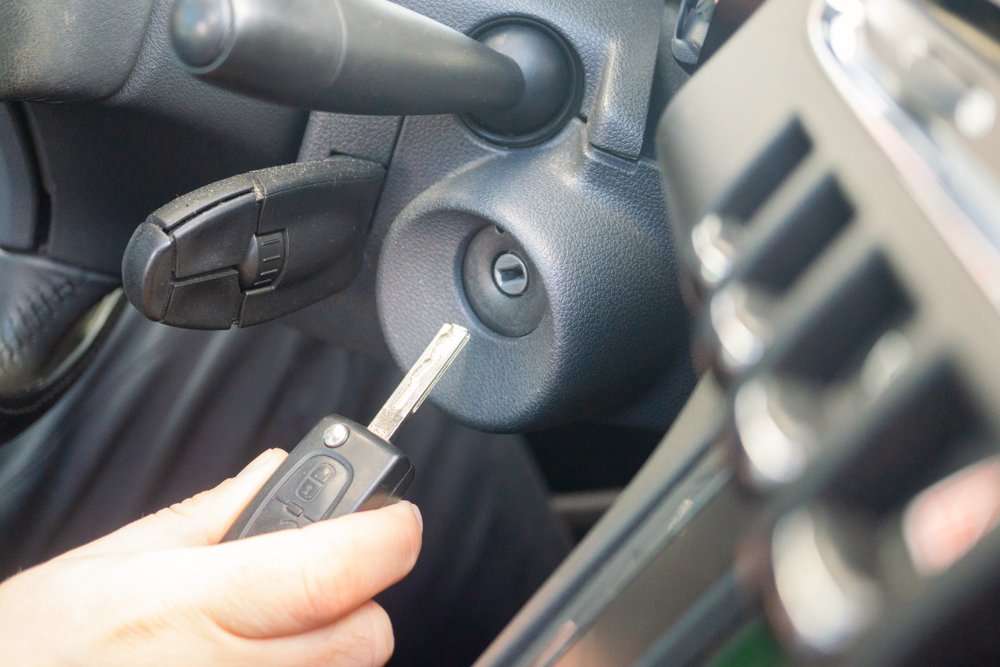 Why Do Keys Get Stuck In The Ignition?

There are a few common causes of a stuck key in a car’s ignition. The problems generally occur in the steering wheel column of the vehicle or with the car key.

The first and most common cause of a stuck key is a jammed steering wheel. You can usually solve this problem without a mechanic.

Why Do Steering Wheels Lock or Jam?

The ignition lock feature is actually an anti-theft feature of vehicles. No matter how hard a would-be thief turns the wheel, it will not come unjammed without the key inserted into the ignition.

However, a locked steering wheel confuses and panics many car-owners unfamiliar with the feature. Often, the driver uses the steering wheel to help them exit the car and give it an accidental yank, engaging the lock feature.

How Do I Safely Unjam a Steering Wheel?

Provided you have your car key on you; it’s simple to unjam the steering wheel. You’ll need to first insert the key into the ignition; do not be surprised if it won’t automatically turn.

Another common cause of a stuck key is damage to the key itself. You can sometimes solve key situations, but they usually require a locksmith or mechanic.

A Note On Car Key Anatomy

It helps to understand the general anatomy of keys before reviewing key damage.

A key consists of the head, which usually has the key fob attached, or comes with a cutout for keychain attachment. The actual unlocking and locking mechanism of every key is the blade, tip, and teeth that insert into the ignition. T

he teeth are the ridges and cuts that go down the long blade of the key. Every key has uniquely cut teeth so that each key only opens a specific lock or a particular ignition and locks in the case of a vehicle.

In the case of vehicles, a car key triggers “pins” inside the ignition. When these pins are pressed down and engaged, the key turns, and the car starts. Because keys face constant pressure from insertion and removal from the ignition, the teeth are usually the location for key damage.

What Are The Signs of A Worn or Broken Key?

Most key damage is easily visible with a quick inspection. Any sign of rounded chipped, or cracked teeth indicates a worn key. If the key jiggles loosely in the ignition, the teeth are likely damaged and cannot trigger the pins locking the ignition. Additionally, any bent or arched portions of the key are immediately visible signs of damage.

Can I Salvage A Broken Key?

Very seldom a worn key can be salvaged. Sometimes if it’s just a bent frame, a locksmith can straighten the key without further damage. Usually, if the teeth of keys are damaged, only replacing the key solves the problem.

Can I Use A Broken Key Until I Can Replace It?

Depending on the state of your key, sometimes you can carefully insert it for use to get you to a locksmith. You can try a few methods to get the key working:

How Much Does It Cost to Replace A Worn Key?

The cost of car key replacement depends on if a locksmith can make a copy or if they must make an entirely new key for the vehicle. Both replacement methods require proof of ownership before a dealership or locksmith will cut a new or replacement key.

Generally, a copy car key for any vehicle newer than the 1980s will cost between $75 to $200 for a mid-range model car like a Civic or Subaru. Luxury keys usually cost more to replace, with most sitting around $200 to $500.

Unlike house keys, most modern car keys require a chip or specific programming to work in vehicles without setting off a car alarm. Older vehicles circa 1980 or older may have a “valet key” that locksmiths can replace for under $20.

Keys too worn out for an adequate copy require the locksmith or dealership to cut an entirely new key (a process called re-keying) for the vehicle. Worn keys also need the car’s ignition switch, which only works with a specific key, replaced.

The average cost for key replacement with a new cylinder ranges between $275 to $500 for most models of vehicles, with luxury cars generally costing around $500 to $700.

If the key turns, but all you hear is the dreaded click click click, and the engine refuses to turn over, your car probably has a bad alternator, also known as the “starter.” The alternator is responsible for charging the vehicle’s battery while running and ultimately powers the electrical system of cars – including the lock and ignition system in many newer vehicles.

What Are The Signs of A Bad Alternator?

If an alternator goes out, the most notable sign is a car failing to start. Additionally, you may notice dimming lights, grinding noises, or burnt smells. The strange noises and smells indicate a worn-out alternator attempting to function, resulting in friction on the pieces.

How Much Does It Cost To Replace An Alternator?

You can expect an alternate part to cost anywhere from $150 for a commuter car like the Civic to $1,000 for luxury models. The good news is, labor cost is low for alternator replacement, with the bulk of the cost coming from the part itself.

Most folks are surprised to hear that a vehicle’s battery can stop a key from working, but it’s true! Newer cars often utilize their batteries to power the ignition system. Without some electricity flowing through the car’s electronic system, the key may not turn in the ignition.

What Are The Signs Of A Dead Battery?

Detecting a dead battery is pretty straightforward. Check if the lights come on in the car when you open a door or try to turn on your hazard lights. If they do not turn on, you have a dead battery to blame.

How Much Does It Cost To Replace A Dead Battery?

Battery replacement is, fortunately, easy enough for even a new car DIYer. You just need the new battery and a wrench! Loosen the bolts holding the car battery cables in place. Remove the negative cable first, then the positive. Pull the battery out of the vehicle. Then, place the new battery into the same spot as the old one and reattach the cables.

Keep in mind that batteries are heavy and contain corrosive materials. If you are concerned about replacing your car battery, ask the mechanic or auto shop you purchase the new battery from to do it for you – it’s usually a free service with the purchase of the battery. Most new batteries cost anywhere between $150 to $350.

The vehicle’s ignition cylinder is the technical term for the lock and key of the car’s ignition. You’ll find it typically located on the right side of the steering column.

Most cylinders operate in 4 positions: the first position turns to unlock the steering wheel, the second powers vehicle accessories like the radio or AC, the third option turns on the car’s computer and fuel system, and the fourth turns on the engine and starts the car.

What Are The Signs Of A Faulty Ignition Lock Cylinder?

The ignition lock cylinder gives very obvious signs when it has a problem—generally, the four positions of the cylinder stop working correctly when a cylinder is failing. For example, the car radio may not turn on unless you start the engine, or the car may not start altogether.

Another common sign of a failing ignition lock cylinder is trouble with inserting or removing the key – if the key is new or shows no signs of damage, the problem is likely the cylinder. Generally, only a mechanic has the expertise to fix this problem for you.

How Much Does It Cost to Replace A Faulty Ignition Lock Cylinder?

Most ignition lock cylinder replacements require a mechanic’s expertise for replacement. Most car owners aren’t skilled in taking apart steering columns, after all.

With that in mind, ignition lock cylinder replacements cost around $200 to $300 for most vehicles, including parts and labor. Keep in mind that just like house keys, you need to show proof of ownership for a new lock cylinder just like keys.

Having a stuck car key can ruin anyone’s day. It’s understandable to want to yank and pull on the key until the car starts, but that can only lead to more damage. Be sure to calmly try and unjam the steering wheel first to verify that the problem isn’t an accidentally engaged ignition lock.