Is it Illegal to Smoke in a Car With a Child in Iowa?

Navigating the various laws related to second-hand smoke can be precarious in today’s world. Once a widely-accepted habit, smoking is now strictly verboten in most settings in which another person is exposed to smoke. For Iowa parents, this leads to the question of whether they are legally permitted to smoke in the car with their children or any other child.

In Iowa, there is no law that prohibits a person from smoking in a car with a minor. While regulations are in place in Iowa to prohibit smoking in enclosed buildings and common areas, personal cars are not currently included in these regulations, even when children are present.

Iowa passed the Smokefree Air Act in 2008 to protect children and families from the dangers of second-hand smoke in public areas. While smoking in a car with a child has not been targeted by this law, there are some caveats to be vigilant of when smoking in a vehicle in Iowa.

In this article, we’ll take a closer look at the Smokefree Air Act and what to watch out for in car smoking in Iowa present and future, as well as what laws pertain when traveling in other states.

Can Iowa Residents Smoke in a Car with Minors?

The Iowa Smokefree Air Act strongly discourages the use of tobacco products when in an enclosed area with minors.

While there is no legal deterrent to doing so, the Iowa State government reminds residents of the health risks and repercussions for exposing children to tobacco.

The Iowa Department of Public Health warns that exposure to secondhand smoke can lead to disease and early death in both adults and children who do not smoke, and may increase the risk of several types of cancer as well as heart disease.

They also determine that there is no level of secondhand smoke that is safe for bystanders to inhale. This warning can be found on the Iowa Department of Public Health Website. 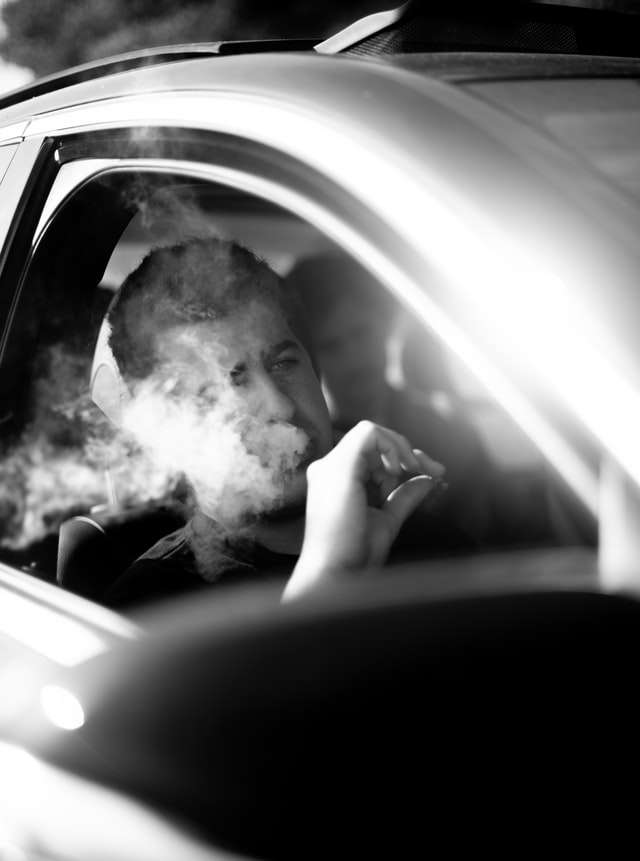 That being said, as of 2021, there is no plan to legislate for any law that prohibits smoking in a car with a minor as this is viewed as a matter of personal choice.

However, there are some restrictions to smoking in a car within the Smokefree Air Act of Iowa. While smoking in a personal car with a child is not prohibited, there are a couple of exceptions in which it could be found illegal under other regulations.

Is Smoking in a Car Always Legal in Iowa?

While smoking in a personal car is legal, with or without passengers, this protection does not extend to shared vehicles.

The law stipulates that smoking within a vehicle is not regulated if that vehicle is for the “sole use of the driver” and is not also used or assigned to any other driver or passenger. However, any work vehicle that takes passengers at any time falls under a no-smoking regulation.

What this means is that smoking in a vehicle is not permitted when using a company car. Any shared vehicle must be smoke free at all times, and have a “no-smoking” sign posted in the vehicle.

This includes any vehicle which another person will use as either a driver or a passenger. Therefore a car that is used as a transport for a daycare or any other business relating to children falls under this provision, and no individual may smoke in that vehicle.

Regular carpooling does not fall under this regulation, although Iowa’s guidelines strongly advise against smoking in a vehicle with minors due to the inability of children to control the situation. The Iowa Department of Public Health appeals to a moral imperative rather than a legal one in this scenario.

While there are no stipulations on smoking in a personal car with a minor, there are other protections in place under the Iowa Smokefree Air Act to protect minors from secondhand smoke.

There is a general prohibition of smoking in public or shared indoor areas such as work areas (including private offices), restaurants, classrooms, auditoriums, restrooms, medical facilities, stairways and elevators, hallways, cafeterias, and employee lounges.

Certain outdoor areas are also protected under the Iowa Smokefree Air Act, and this is where those who smoke in a car can run into an exception regarding their protection under the law.

You May Like  Kansas Car Seat Laws 2022 (Age & Weight Requirements)

These areas in which smoking is prohibited include entertainment venues, athletic fields, outdoor seating or service areas in restaurants, public transit platforms, school grounds (including all surrounding areas such as parking lots, playing fields, tennis courts, etc.), and including any vehicle on school grounds.

You can see the entire list by clicking on the link to the Iowa Smokefree Air Act found here.

So, while smoking in a personal car with a minor may be legal under the Iowa Smokefree Air Act, an exception is when that car is present in outdoor areas where smoking is prohibited, and school grounds especially (as it is more likely that these laws will be enforced where there are so many minors present). This includes not only the school parking lot but any lot that is associated with the school, such as the parking lots around playing fields.

In the case of smoking in a car when it is present in a smoke-free area, the protection is expanded to include any place that is present on these grounds, and that will include a vehicle.

Is Car Smoking Banned in the United States?

According to the Public Health Law Center, The laws differ in each state or territory, defining “child” at varying ages, and carrying different penalties. In Virginia any child under 8 years old exposed to secondhand smoke can lead to a fine, while in California any person 18 or younger is protected. The other states fall somewhere in between.

The smoking prohibitions in these states and territories are considered civil violations, and carry penalties ranging from community or minor fees for a first offense, with increasing penalties for multiple offenses. Puerto Rico and Guam carry the highest penalties, with a $2,000 penalty attached to a 3rd offense, and evidence of child abuse or neglect as a third offence penalty, respectively.

In most states, smoking in a vehicle with a minor is considered a secondary offense. This means that a person cannot be pulled over for this crime, but it may be tacked on to any other moving or traffic violation.

While the courts may be lenient with out-of-state offenders, there is no guarantee that this will be the case. A resident of Iowa can be charged and fined for smoking in a car with a minor if they are driving in a state with this law in place, and are subject to the fines attached to breaking that law.

Takeaways for Smoking in a Car with a Child

While not a good idea from a health perspective, in Iowa there are no current laws on the books that pertain to smoking with a child in a car. However, do keep in mind that there are a couple of exceptions to this lack of regulation under the Iowa Smokefree Air Act. 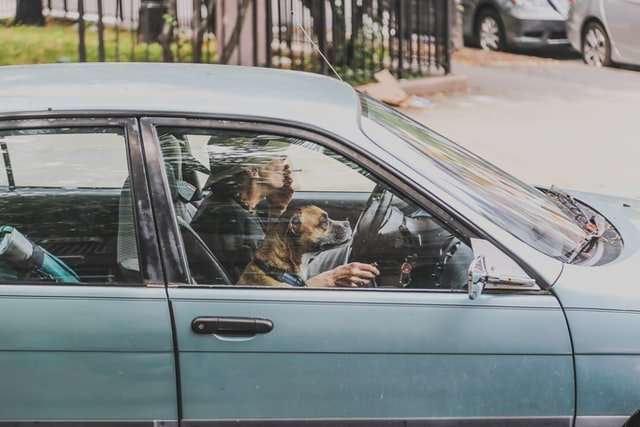 While not written specifically with minors in mind, the law against smoking in a shared use vehicle prohibits smoking in any kind of company or business car that carries other individuals, or that is used by another driver.

This prevents smoking in a vehicle that is used to transport children in a business capacity, such as vehicles used for licensed daycares or after-school care programs.

In any case, smoking in an enclosed space with anyone, especially a child, is not a good idea from a health perspective, even if there are no current laws on the books that pertain to smoking with a child in a car.

Any parent, family member, or guardian should protect their child against second hand smoke to avoid long term health complications, or early-onset disease, whether the law requires it or not. 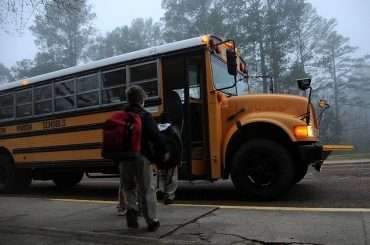 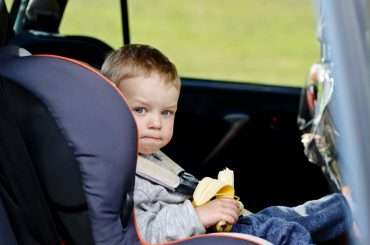 Can You Feed Baby In Car Seat?