Car seat trade-in programs are a great opportunity to recycle old car seats. By recycling our children’s car seats, we can save more children that are exposed to the dangers of motor vehicle accidents while also saving the Earth.

Below we’ll cover each one of these car seat trade-in programs in more detail, and what you can expect in 2023.

Target Car Seat Trade-in Program – What to Expect in 2023

In 2022, Target held it’s first car seat trade-in promotion of the year effective April 18 through 30, so it’s safe to expect something around the same time in 2023.

Then, from September 11-24, they hosted another event.

During Target’s events, you may bring your old, expired, or damaged car seat and receive a 20% coupon off one car seat, stroller, or any other baby gear.

Based on the schedule this year, it is safe to assume that if you missed the September event, the next trade-in program will happen again in April 2023, so mark your calendar now!

All car seats must be traded in at the Target stores. Target will have drop-off boxes to accept guests’ car seats for recycling located near Guest Services. You must have a Target Circle account or the Target mobile app to receive your 20% off coupon. Check with your local Target store first to ensure they are participating before bringing in a car seat to recycle.

Most Target stores participate in the program. To find a participating store, click here.

Coupons can be applied to both in-store and online purchases and are eligible through the end of May. Guests must be enrolled in Target Circle on their mobile device to participate in the trade-in and scan in a coupon.

What Car Seats Are Accepted?

Target’s program accepts all kinds of car seats. These car seats include, but are not limited to:

The car seats Target accepts can be expired or damaged, and don’t need to be in great shape. So even if you think your old car seat is in a questionable condition, you should bring it to Target. They’ll accept any car seat for their recycling program.

When Can I Trade in?

During it’s events, Target tends to accepts trade-ins during about a 2-week period.

In 2016, Target officially became the first retailer to hold a car seat trade-in event. After Target pushed the idea forward, many other retailers followed in Target’s footsteps. Target encouraged its shoppers to recycle their car seats by utilizing incentives.

Interestingly, since Target launched this program, it has recycled over half a million car seats, and those numbers are only increasing. Also, because of Target’s trade-in program, the corporation has recycled over 11.9 million pounds of materials. That’s a vast amount of plastic material that Target has prevented from winding up in landfills. 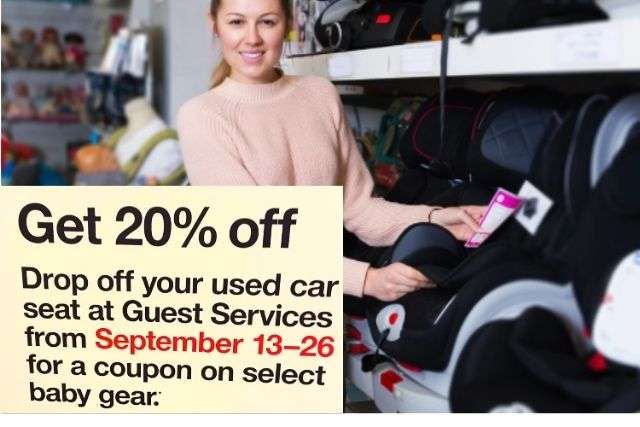 Several corporations that sell car seats offer trade-in programs to entice parents to recycle their old car seats. The retailers that are currently offering this include:

In 2019, this first-ever event was held during September 16-30th, nearly right after Target’s event. Walmart decided to hold their car seat trade-in program during September because it is National Baby Safety Month.

When Will Walmart Hold this Year’s Event?

During the 2019 event, Wal-Mart and TerraCycle accepted over 1 million car seats for recycling. They look forward to hosting similar events in the future.

Wal-Mart last hosted this event in 2019  has not updated their website to indicate future events. We have contacted Wal-Mart to ask if they will be hosting this event again this year and are waiting on a response.

Wal-Mart has been focusing its sustainability efforts on reducing single-use packaging and encouraging its product providers to do the same. They also encourage consumers to recycle plastics, glass, and paper products and use re-useable bags rather than plastic shopping bags.

In the 2019 program, All car seats collected in this program were recycled through TerraCycle, and all components were diverted from landfills. 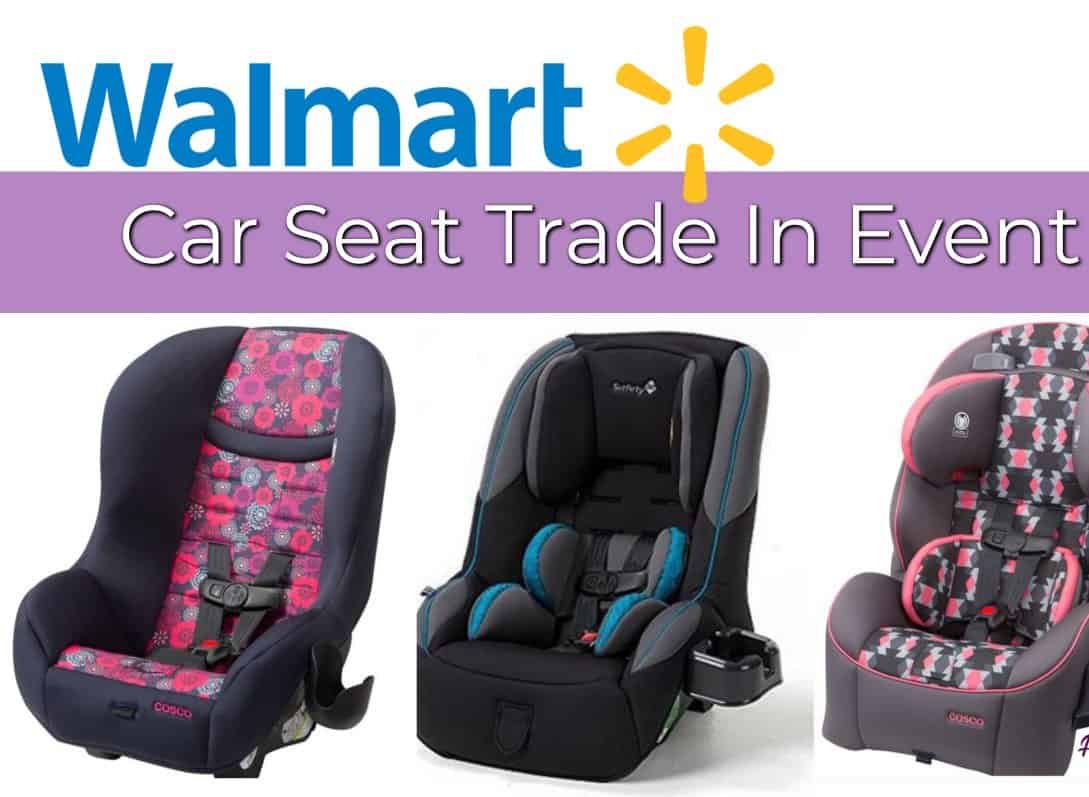 Walmart advertised this event with safety in mind, letting everybody know that safety was the most important factor in their baby department. Because of that, Walmart decided to use its vast size and bevy of stores to make an event that created unprecedented access to a trade-in of infant car seats.

By trading in their old car seats, people received a gift card to the store. So, if a person needed a new car seat, that gift card could be applied to that purchase. Walmart also mentioned that they were focused on sustainability, so that is why they partnered with TerraCycle to help them recycle the components of the car seats.

What Types of Car Seats Can You Trade-in?

TerraCycle does add a great deal of assistance to the Walmart recycling program. Because of TerraCycle, car seats that were traditionally considered non-recyclable all of a sudden became nationally recyclable.

That meant that much like Target’s program, Walmart will also take any car seat. Walmart also announced that by recycling so many car seats, they hoped to give people access to a new car seat to protect their children with ease. Because of the event, Walmart diverted the plastic equal to about thirty-five million water bottles away from landfills.

The organization that partnered with Wal-Mart in 2019, offers two recycling programs for baby products – including car seats.

What Century Baby Gear Can I Recycle?

What Do I Put in the Box?

Terra Cycle asks that you only put one product at a time per box. The box should not exceed 96 inches in length and 130 inches in combined length and girth (Length + 2x Width + 2X Height). Please remove as much debris from the item as possible before packing it. Also, ensure that the product is dry before packaging. Don’t send anything that is considered hazardous waste as that will not be recycled.

What Not To Put in the Box?

Any baby gear items that are NOT electric, electronic, or toys with batteries. TerraCycle also does not take clothing in this category.

What Does TerraCycle Do With These Products?

TerraCycle cleans the items and separates the materials into types. Plastics and fabrics are recycled into raw materials that can be reused in new products. Metals are melted down and reused for new items.

Is There a Reward for Recycling?

TerraCycle offers a reward point program. You can earn 100 points per pound of recyclable material. Then you can contribute those points as a charitable monetary donation to the non-profit organization or school of your choice.

TerraCycle will accept other brands of car seats and non-electronic baby gear. For this program, you order a Zero-Waste Box, fill it with accepted items, print the prepaid return label and affix it to the box, and return it to TerraCycle. 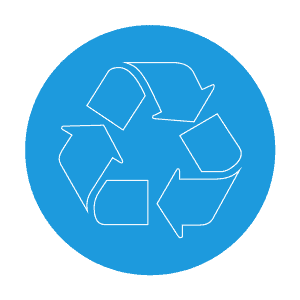 Another manufacturer that offers a car seat trade-in program is Clek.

With Clek, you can perform your trade-in online any day of the year as long as you are willing to pay for the shipping of your car seat. Then it would help if you dropped your package off at a local UPS store.

To get started with Clek, you first need to buy a recycling return label, which costs $39.99 on their website. After you pay for your label, within a single business day from the day of your purchase, you’ll get an Email with several items included in it. The Email will feature:

Toys R Us has reopened across the U.S. with new owners. As yet they do not have baby products in stores, but they are planning to reintroduce Babies R Us stores as a part of their business strategy. Be on the lookout for a new Babies R Us store in your area.

As Toys r us continues to re-open across the country, they have not yet reintroduced their car seat recycling program. We will continue to check on their progress.

Why Should You Trade In Your Car Seat?

Since car seats do expire and degrade after exposure to a wide variety of climate issues, many of them become unusable after five to six years. For more detailed information about how long is car seat is good for click here.

Furthermore, if a car seat is involved in a crash, it should not be reused again. That’s because the car seat experienced a tremendous amount of stress during the accident and is now weakened.

So, annually, many car seats are disposed of, and that creates an environmental problem. However, by utilizing a car seat recycling program, you can not only help save the environment, but you can also earn rewards and coupons towards the purchase of a new car seat. 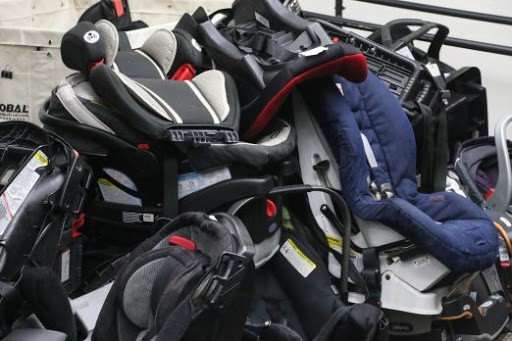 Since car seats degrade within five to six years after purchase, many of them are trashed. On top of this, car seats cannot be reused after an accident.

So, that results in even more plastic being dumped into local landfills, all in the name of child safety.

Luckily, many corporations are noticing the environmental concerns the disposal of large amounts of plastics creates and are stepping up to help with recycling programs. If we continue to allow all of that plastic to wind up in our landfills, we’ll only exacerbate our environmental issues (source).

Landfills are not the right way to get rid of old, degraded car seats. Instead, many corporations that sell car seats have realized that de-manufacturing and recycling those old car seats solves many problems.

By encouraging people to avoid throwing their car seats out and instead offering rebates and coupons towards the purchase of a new car seat, the car seat issue is slowly evolving with a more positive solution.

Encouraging Buyers Towards a Solution

Still, the people that purchase car seats regularly need also to become a part of the solution.

While it does take some time and effort to dismantle a car seat to recycle it, it is certainly worth the effort in the end. By turning in an old car seat, buyers can save money on their next purchase of a car seat or other item for their child at particular stores.

Now that you understand the value of trading in your car seat to help the environment and your pocketbook, you have three different options. Whether you trade-in with Target, Walmart announces they are doing another trade in event after taking a number of years off, or use Clek’s program, you’ll help out the environment and receive the benefit of a discount towards your next purchase. That way, both you and the environment win. 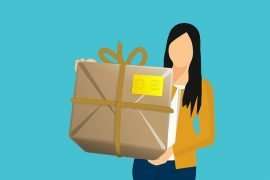 How Much Does It Cost To Ship A Car Seat 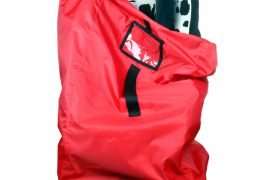 Does A Car Seat Count As A Checked Bag 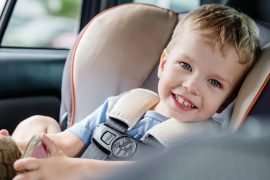 How To Get A Free Car Seat Through Medicaid